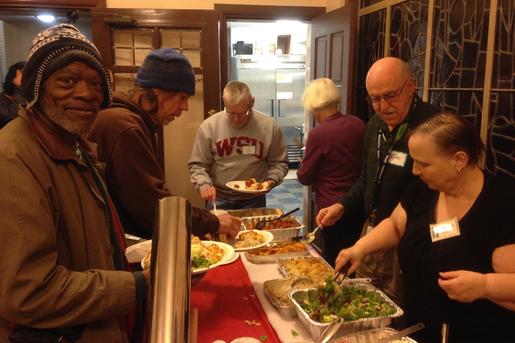 For at least seven years the Homeless Network of Yakima County has overseen an Extreme Winter Weather Shelter Program in Yakima.  The program helps ensure safe overnight shelter for those who are homeless during the winter months.  This past winter three local churches, Central Lutheran Church, Englewood Christian Church and Unitarian Universalist Church of Yakima, supported the program by providing space for the overnight shelters.  Along with making sure those who need it have a warm, safe place to sleep at night, a variety of organizations, businesses and individuals assist the effort by providing meals to shelter guests.  This past winter, as well as the winter prior, members of Grace of Christ Presbyterian Church of Yakima volunteered to receive and serve meals at their church for the men who slept at Central Lutheran Church overnight shelter.

“Volunteers arrived at 5:30 to set up and to be available when the food arrived, which was usually prior to 6:00,” stated Linda Sorenson, a member of Grace of Christ Presbyterian Church and co-coordinator for meal hosting program Grace of Christ.

Up to 20 nightly guests would arrive about 6 p.m., enjoy a meal, and then have a couple hours to relax before moving on to their overnight shelter.

“They visited, viewed TV or a movie, read, napped, played a game or instrument, etc., general down time until their prep for departure,” said Sorenson.  “Often they helped tear down the tables and chairs and sometimes helped with the vacuuming.”

Sorenson added, "On holidays and special events like Super Bowl Sunday, volunteers made an extra effort to make the meal special for the guests. Thanksgiving was a turkey dinner with all the trimmings.  At Christmas, the meal was served around a decorated tree and everyone received a wrapped gift provided by generous donors.  Super Bowl Sunday had lots of snacks while the game was on."

The guests would usually depart between 8:50 p.m. and 9:00 p.m. for their overnight shelter.  Volunteers from Grace of Christ drove one van of men, and Central Lutheran Church transported the other half of the group.

The Extreme Winter Weather Shelter Program started November 15 and ended March 21.  The shelters operated seven days a week for four months, and that kind of a commitment can take a toll on volunteers.  According to Sorenson, Grace of Christ organized a large volunteer pool and made sure their schedule allowed enough flexibility to ensure everyone who wanted to could participate.

“I was really blown away by people’s faithfulness,” she said, describing the commitment of those who volunteered to participate at least one day a week.  “They stayed and they were so responsible for covering their shift if there was something that came up.  Because how do you know four months ahead of time if you are going to be there that night.”

In addition to that core group, there were many other volunteers who participated once or twice a month.

“I estimated there were more than 1,700 man hours of volunteer time over the four-month period at Grace of Christ alone,” said Sorenson.

While volunteers from Grace of Christ coordinated space and supplies, set-up, served meals, and clean-up afterward, Yakima Neighborhood Health Services, who administered the Extreme Winter Weather Shelter Program, delivered all the guests to the various sites and worked with a number of other community organizations, individuals, and business to provide meals for the program.  Below is a partial list of those who provided meals or donated food for meals:

According to Sorenson, more than 1,800 meals were served over the course of the program this past winter at the Grace of Christ site alone, but close to as many meals were served at the others combined as well.

It was a lot of work for everyone involved, but she feels it is part of the responsibility of being a Christian.

“I think that because we are disciples of Christ, and he said to feed the hungry and shelter the homeless, and he walked that, and that’s how we are to walk.  So, we are always challenged to walk in the footsteps of Jesus,” said Sorenson.  “That’s the God we serve, and so because that’s who he is, we want to emulate his character in what we do.”

This week we would like to thank Grace of Christ Presbyterian Church for their continuing support of the Extreme Weather Shelters.