Once a month about 20 members of Wesley United Methodist Church gather in the church kitchen to prepare an evening meal for residents of Camp Hope and Noah’s Ark.  Their work starts at around 10 a.m., and things won’t be finished until the last of the pans and serving utensils are cleaned sometime after 6:30 p.m.

The group got its start several years ago, preparing meals for the Extreme Winter Weather Shelter program, which, at the time, was run by Yakima Neighborhood Health.  They continued when Camp Hope took on the program.  Ingredients for the meals, and funds to purchase what isn’t donated, come from a variety of sources.  They post a list of the food needed each month and church members sign up to provide the items.  The church also has a small fund which helps out, and some members simply donate cash to the cause.

“I’ll be standing having coffee Sunday morning and somebody will walk up and give me a $20 bill,” said Wendie Hansen, volunteer organizer with Wesley United Methodist Church.
While preparing, cooking, transporting, serving, and then cleaning up afterward takes the better part of the day, most of the volunteers are only involved in one or two different aspects of the meal.

“Now these gals will be mostly gone by noon,” said Hansen, gesturing toward the women preparing food in the church kitchen.  “They will have everything in the oven by noon, and, usually just me, I will stay and make sure it goes in the oven, that stuff is hot and ready to go at the right time, and then the people who will serve show up again, and off we go.”

Church members from Wesley United are not the only people who help.  A group of volunteers from Selah United Methodist Church also participates by providing food and serving meals.

“They have maybe half a dozen to ten people who provide food or come and serve,” said Hansen.  “For the last year or so, they have provided the bulk of the servers.”

Everyone involved has their own specific reasons for participating, but, ultimately, it comes down to simply having compassion for those in need.

“It’s a general feeling of trying to help people who find themselves homeless,” said Hansen.  “We understand there are some people who are chronically homeless and they still need to eat.  We aren’t social workers… we can’t help them with the underlying issues of why they are homeless, but we can feed them, so that’s what we do. 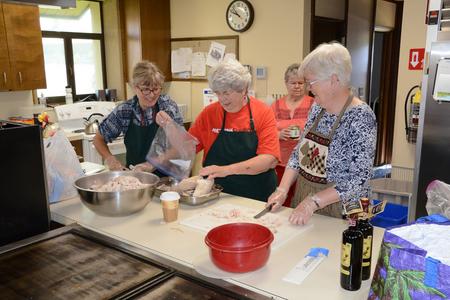 This month we would like to thank Wesley United Methodist Church for their continuing support of the Extreme Weather Shelters.